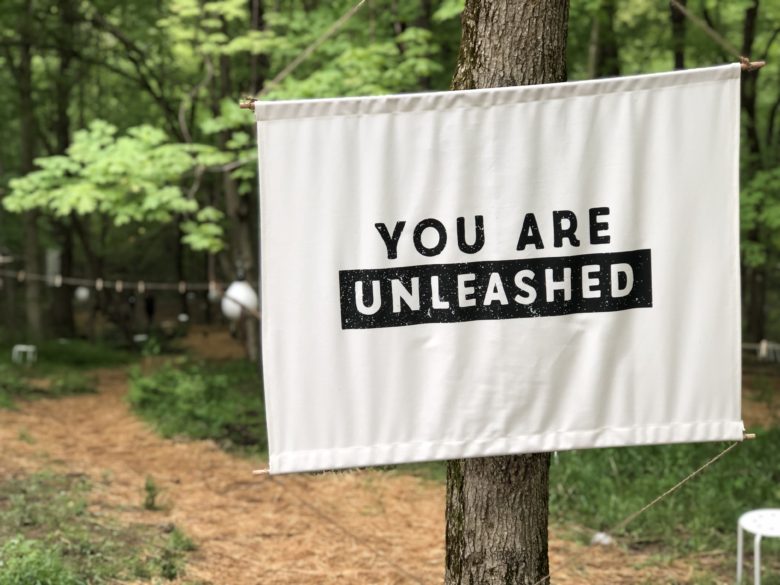 More than 150 years ago, slaves fleeing from the South crossed the river into Ohio, fighting for physical freedom. On three different occasions over the past eighteen months, I have camped on a slice of land along the banks of the Ohio River in search of spiritual freedom.

In October 2017, I felt a nudge to attend Woman Camp, but I didn’t know anyone going. I called my church and asked to be placed in a group with people from my side of town. I then secured my gear and packed my bags. While driving through the dark to meet my group, I had a one-sided conversation that went something like this: “What are you doing? You don’t know anyone going. You are alone. This is a bad idea. You should turn around and go home.” To silence my thoughts, I flipped on the radio and heard the words “You are not alone.” That certainly shut me up, and I continued on my way.

While at Woman Camp, we identified the veil we were wearing – the burden God wanted us to surrender to Him. My veil was the idea that my worth and my identity are determined by my works. This veil was removed and burned in the fire.

During Solitude Time, we walked into the woods where mirrors hung on trees. Each mirror was a different size and shape, and they had one word or phrase written across the top. I weaved through the trees in search of a word that stuck out to me. When I stepped in front of the mirror that said ALONE, I was struck by the image staring back at me. This mirror was long and slender and distorted my image – I appeared younger and thinner in the reflection. In my mind, the image was beautiful, but this conflicted with what I viewed as reality. About a year earlier, I had sought wisdom from someone I trusted but the words used were terribly hurtful and harmful. I held onto these lies. They not only affected my thoughts and behavior, but they clouded my true identity, which is a treasured child of God. It then occurred to me that this image in the mirror is how God sees me – perfect and beautiful despite my flaws, my failures, or my efforts.

That evening at dinner, each woman had a personalized place card at her seat with a scripture printed on the back. When I read “You are protected,” I was really disappointed. Sure, that’s nice to know, but I expected something like “You are not alone” or something related to my identity. I failed to see how this verse applied to my situation at that time. I tucked the card in my journal and didn’t give it any additional thought.

My husband and I attended Couples Camp in early April of this year. The theme was RELEASE. At this point, I was struggling with a fear of failure, a fear of truly being known, and a fear of being judged. On a gorgeous Saturday morning, we gathered under the main tent to worship. Travis went to refill our water bottles, and as I looked around, there were people hugging and laughing. I didn’t see one familiar face, and a loud realization washed over me. When my husband returned, I asked, “How can I be in a group of 1200 people, sitting beside the one person who knows me better than anyone else, yet still feel alone?” I fought the tears and apologized because I was so afraid people were judging me, judging us. He wrapped his arms around me and whispered words of understanding and encouragement. I composed myself as the band began to play. The second song’s lyrics promised God is always with us, we are never alone. The timing could not have been more perfect, and nothing could stop my tears.

During Solitude Time, I was reminded that God wants me to focus on Him, to find my identity in Him. While following the prompts in the field guide, I asked God if there was anyone I needed to forgive, and I immediately pictured the person who had spoken such hurtful words to me. I then surrendered the lies and offered forgiveness. In sharing these revelations with our group, I learned that I’m not alone in my struggles. As a result, I found freedom.

Last weekend, I attended Woman Camp again, this time with two of my best friends. The theme was UNLEASHED. During Solitude Time, I walked through the woods and read signs hanging from the trees. My eyes were drawn specifically to these three.

As I worked my way through the questions in our field guide, I asked God to reveal the “one thing I need to fight through to get to the freedom and power (He) has waiting for me.” I got nothing. I was stuck, so I followed the prompts and made my way to the prayer tent. After spilling my story to the two prayer warriors, I was asked if I had ever lost anyone or if anyone had ever left me. A swell of grief filled my chest and spilled from my eyes. I told them the darkest day of my entire life was our younger daughter’s first day of kindergarten, and I felt foolish because that was almost seven years ago. The women explained that this sadness shows the love I have for our two girls, and that God’s love for me is even greater. He will never leave me.

And now, all of this makes sense! Before becoming a mother, I worked as a Certified Athletic Trainer. I was constantly surrounded by people — talking to others and touching them were job requirements. Then as a mother with young children, it seemed I never had a moment by myself. In this season of my life, I’ve made writing a priority. I enjoy the creativity and challenge, but it can be lonely. Somewhere along the way, I lost my true identity. The prayer warriors led me through a prayer to repent of the idea that I’m alone.

In our field guide, we read, “When facing a battle we have two choices. We can believe that we are equipped and called to a deep purpose–and fight. Or we can look at our chains, realize how long we’ve been leashed–and retreat…you have been designed for greatness by a God who can unleash you with power into your calling and purpose, (but) you need to…fight for what God has for you.” A woman shared her story from the stage. She explained how she was missing out on God’s redemptive power because she’d wrapped the lies she believed about herself around her neck like a collar and attached it to a short leash.

Alli Patterson, one of our teaching pastors, also spoke from stage, and her message made a profound impression on me. To be unleashed does not mean to be cut free. We need an anchor – this anchor is Jesus. Through Him, we can experience the fullness of God, but fear steals our fullness. She then listed many words ending in the suffix -ful (joyful, beautiful, prayerful, etc) and encouraged us to identify our -ful word because that is how and where God unleashes us. I immediately thought “plentiful” because during our time at camp, I had become aware of the community with whom God has surrounded me. While walking through camp, so many women I had come to know through various groups and serving opportunities at our church greeted me BY NAME–so many that a fellow camper even commented on it!

Alli continued to say as we fight for our freedom, we don’t go into the fight unprotected. Ephesians 6: 10-16 tells us we can put on the full armor of God so that we can stand strong against the enemy. We are protected. (Remember that place card from my first Woman Camp experience?)

I’m sharing this part of my journey because I feel God is calling me to write stories about wounded warriors — to help our veterans find light in the darkness. It is my understanding that many of our nation’s heroes feel alone in their struggles. Though our circumstances are not the same, I understand what it’s like to feel isolated, and I want to help them find freedom through my writing.

This past Saturday evening, I was one of 1700 women who sat down to feast at a table prepared for us by our Heavenly Father. Our names were written in gold across the top of the place cards, and a scripture was printed at the bottom. Hungry to learn what battle God has called me to fight, I read my card and got chills. Though this journey has been painful at times, I am relieved to receive these sweet reminders that He’s with me, and He’s in control.