I originally planned three blog posts to highlight our November trip to Nicaragua.  (The first two posts can be viewed here).  As I began writing this third post about some of our favorite memories, I realized there was too much to tell.  Instead, I decided to write about the final day of our Central American adventure.  I have saved another special story for a fourth and final post about the trip.

Before boarding buses each morning, we’d spend devotional time together as a large group.  Amigos for Christ staff members would prepare us for the work ahead and discuss the day’s theme.  For example, when we climbed the volcano on Monday, the theme was juntos, Spanish for together.  Another day’s theme was Every Story Matters, and these words are stuck in my mind as I write this post about our second visit to La Chuscada.

As Amigos prepared for our visit, they arranged for several families in this rural community to host home visits.  Menus were agreed upon, and groceries were purchased in advance.  Our family was among those chosen to spend the afternoon with a family in their home.  We carried bags of groceries from the school (red roof, left side of photo above) and headed down a path through the woods. After crossing a peanut field, we met the family:  a woman, her daughter and granddaughter (age 2),  the woman’s son and his wife along with their daughters (ages 3 and 1).  As we adults prepared the meal, our daughters played with the three little girls.  I hope I never forget the sound of their squeals and giggles! 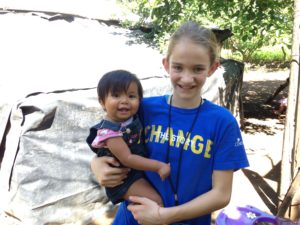 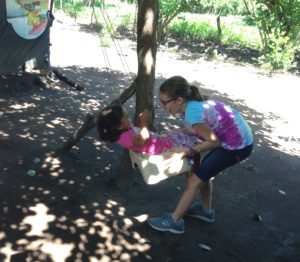 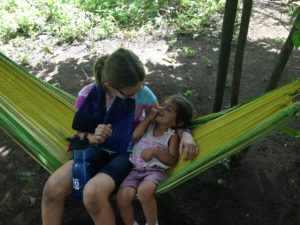 While I stood at a table in the shade and helped slice plantains on a mandoline, Travis and another man from our team built a fire and heated oil in a cast iron pot. They took turns, and as one fried the plantains, the other waved a stick to keep the chickens from stealing our lunch.  When the plantains were finished, I used a knife to shred a head of cabbage for the salad (slaw). As a result, I developed a ginormous blister on my index finger. Hiding my hand, I followed the ladies into the kitchen to wash the cabbage. A large bowl was filled with clean water, and I pressed the cabbage much like I was kneading and folding dough. The water was then strained through my fingers, and the process was repeated two more times. 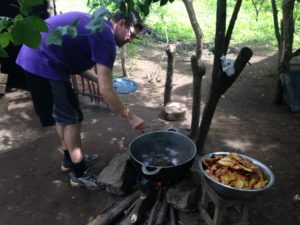 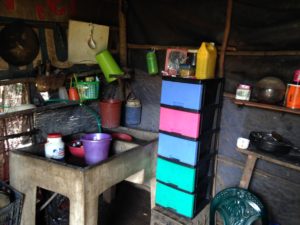 As I worked at the sink, now squeezing lemons for lemonade, the daughter-in-law cooked enchiladas over a fire to my left.  The kitchen was hot, and the smoke made my eyes burn. I wondered if they suffer from respiratory diseases.  After filling the purple bucket with water, we sweetened the lemon juice with cups of sugar and a pinch of salt.  I confessed I accidentally dropped a seed in the lemonade. The woman’s daughter smiled as she fished five seeds from the bucket.  Oops.  When I shrugged my shoulders after pretending to take a drink and spit out a seed, both young women laughed. Language was no barrier on this afternoon–the ladies had a blast giving me a hard time, especially when they discovered my blister.  Unlike the giggles of little girls, I hope to soon forget the sound of laughter at my expense. 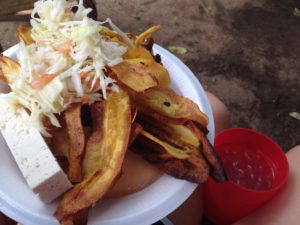 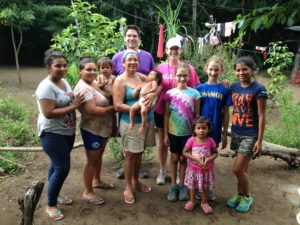 As we enjoyed our meal under the shade of a large tree, we answered their questions about our Thanksgiving traditions.  They told us about their celebration of The Immaculate Conception, and we were surprised to hear them speak of Black Friday sales in Nicaragua.  Joking aside, I shared this story along with the pictures because the two days we spent in La Chuscada made me realize how much I take for granted.  I hope I don’t lose perspective as I settle back into my rhythms and routines here at home.

With clean water and a new school under construction, the people of La Chuscada have hope for future generations.  They are living a new story.  But the work is not yet finished.  There are ways to make a difference in the lives of others in Nicaragua without having to travel.  Please visit Amigos for Christ to learn how you can get involved.

I saved another special story for a fourth post.  I hope you’ll check back soon!