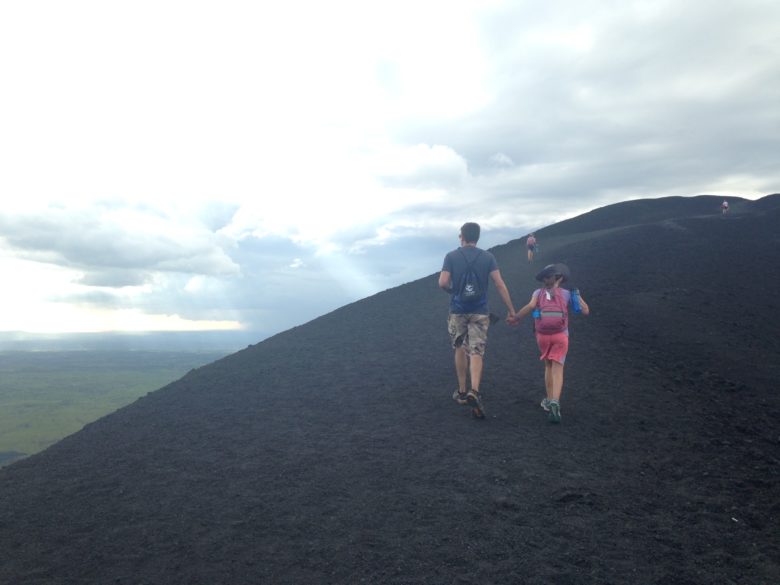 After a long day of travel, including a four-hour layover in Houston and a lengthy bus ride from Managua to Chinandega, we arrived at Amigos for Christ around 1:30am local time (2:30am at home). We rose four hours later and joined the rest of our group for a delicious breakfast of pancakes, pineapple, rice, and beans. With full bellies, we learned we would spend the day conquering Cerro Negro together. Staff members shared the story of David and Jonathon (1 Samuel 18-20), explaining that as we climbed the volcano, someone in the group would serve as our Jonathon, and we would be Jonathon for someone else. The Bible verse for the day was Philippeans 4:13 “I can do all things through Christ who strengthens me.” While writing this post, I came across a study by Jack Kelley in which he eloquently describes the covenant relationship between David and Jonathon. He continues to provide details to connect us to the Everlasting Covenant between God and His Son. It’s well worth the read and ties into the rest of this post. At this point, I invite you to take a peek into our family’s past for additional context that may be helpful as this story unfolds.

We boarded a bus for the 90-minute drive to the foot of the volcano, and we laughed as we dodged bicycles, tractors, and livestock along the way. Once we spotted the steep black mountain, our younger daughter grew anxious. Her thoughts spiraled out of control as she listened to concerns and jokes from fellow travelers. Having only four hours of sleep didn’t help the situation either. My husband and I encouraged her, but our attempts to alleviate her stress increased her aggravation.

From the moment we set foot on the volcanic ash, our daughter told us she couldn’t do it.  I explained she was there for a reason–to be someone’s Jonathon, but I couldn’t do or say anything to make her situation any better. I couldn’t fix it–again. As others passed us and offered words of encouragement to her, I was embarrassed and worried this group of strangers would judge me as a mother. Doubts crept into my thoughts–why had we come to Nicaragua as a family? At this point, we had reached a steeper, rockier section of the trail, and I was physically and mentally exhausted. I asked my husband to hold our daughter’s hand, believing he would help her reach the peak. After taking a quick break, he chose a landmark, and they hiked to that point. They repeated these steps as they continued up the side of the volcano.

In dealing with our family’s struggles over the past seven years, I’ve developed some unhealthy control issues, and I’ve recognized the need for change. Taking advantage of my time alone on the journey to the peak, I prayed. I remembered hearing Alli Patterson’s testimony shared during a weekend service at our church this summer, and though our circumstances are different, her message stuck with me. So just before I reached the crater, like Alli, I invited God to break me. Even in this vulnerable moment, I tried to have control by asking Him not to involve Travis or the girls in the process. Quite ridiculous, I know! At that moment, I had no idea how this prayer would affect the rest of my trip, but I’ll have to save the rest of this story for another post. 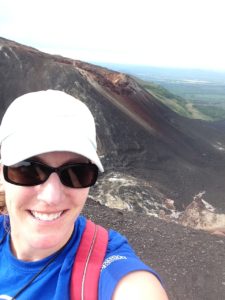 Eventually, our family of four reached the peak, and we were proud of the accomplishment. We congratulated the others from our group and celebrated together. Our daughter did smile! During our group debriefing session later in the evening, we learned that she had inspired other adults to continue on the trail when they wanted to quit. She was someone’s Jonathon! 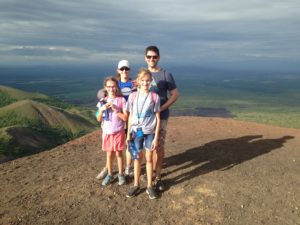 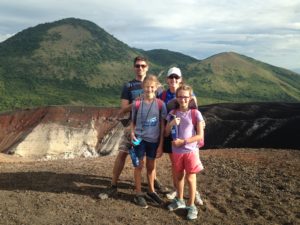 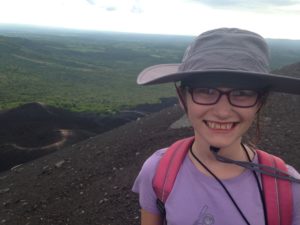 My favorite part of the day was when we got to “run” down the steep side of the volcano to the buses. 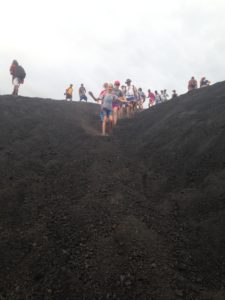 During the bus ride back to Amigos, I scrolled through the pictures I had taken on my phone. Immediately I was struck by the photo of my husband holding my daughter’s hand–as her earthly father, he was her Jonathon. And as I studied the picture, I remembered the scripture read earlier in the day–“I can do all things through Christ who strengthens me.” (Philippeans 4:13).  In this photo, I could also see my Heavenly Father holding my hand on that path, leading me to a better place. Though I don’t know where we’re heading, I trust Him, and I’ll gladly follow.Save