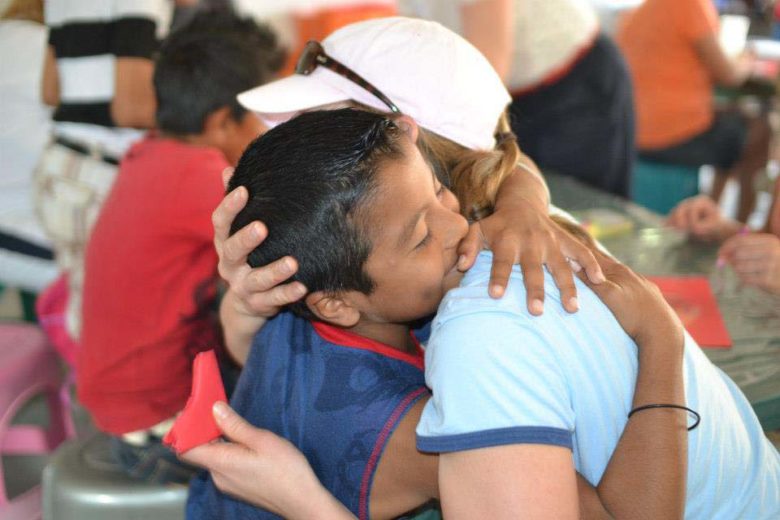 While on a mission trip to Mexico a few years ago, our group visited Bonfil, a town on the outskirts of Cancun.  We met a talented jewelry artist named Rossy who told us God had given her a vision of His light shining in this poor community.  At that time, she had spent about eight years trying to make a difference in the lives of the youth living there.  Every Wednesday and Saturday, about 30 to 60 kids gather at what has affectionately been named “Rossy’s Place.” While there, they sing, hear a story about Jesus, do a craft, and eat a meal. For some of these kids, this is the only meal they get for the day.  The money Rossy earns from selling her jewelry to tourists helps support this ministry.

While we were at Rossy’s Place, Back2Back Ministries staff members Erick and Julie Mowery explained to the children that we were taking pictures of them with the “God loves me” hearts in order to put a name with a face during future visits.  I sat at a table across from two boys, and I showed them what to do with the paper, chalk, and paint that had been distributed.  They immediately gave me ornery little smiles. A., the boy shown in these pictures, started folding up his red paper.  Since I don’t speak Spanish, I used hand gestures and exaggerated facial expressions to give him a hard time about using the paper for the craft.  I was certain he was making a paper airplane.  He just smiled at me.  I walked away to help another group of kids.  A few minutes later, I returned to the boys to find out that A. had still not started the craft.  I continued to give him a hard time, and in response, I got another cute smile.  After circling the room once more, I returned to their table.  Smiling, I rolled my eyes.  A. then handed me a red heart.  He had not been making a paper airplane after all.  I was so touched I wrapped him in my arms, giving him the biggest hug.  Though I’m sure he didn’t understand my words (or the tears that glistened in my eyes), I used a different set of hand gestures and facial expressions to apologize profusely for giving him hard time.  Erick just happened to be in the right place at the right time, and he snapped a photo of the two of us in an embrace.  This was the sweetest moment of the trip for me, and I treasure this picture and the paper heart.  I often wonder if this little boy even remembers our time together.  Probably not. And that’s okay.  That’s not the point.  God is love. 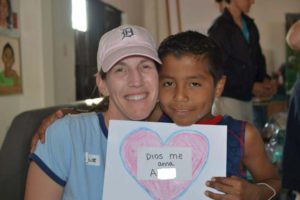